Your car is only as good as its engine. The engine is the one responsible for producing power out of fossil fuels. This process involves plenty of heat, so it, therefore, needs components to dissipate this heat.

Behind the performance of an engine is all the internal components that can either make or break it.

Cylinder heads are one of the most important parts of an engine. In this guide, we will answer the question: What are cylinder heads and what they actually do?

If you have a good cylinder head, then your engine will most likely be able to perform well. These are responsible for many things in your engine, mainly in keeping your car from overheating, which can damage it significantly.

Other than cooling your car down, it is also responsible for housing other parts that are important in the combustion process of your engine.

Definition of a Cylinder Head

The cylinder head is a central part of a combustion engine. It plays a vital role in enhancing its overall performance.

You can find it easily because it usually sits above the cylinders that are on top of the cylinder block. And it is usually closed and detachable.

This component closes the top of the cylinder and helps in forming the combustion chamber. Other than that, the cylinder head also gives a passageway where the air and fuel can flow. It also allows the exhaust to exit.

Cylinder heads can either be made of cast iron or aluminum. Both of these materials have certain advantages and downsides.

Cast Iron heads are mostly durable and cheaper because it is a very abundant metal alloy in the industry. But they are also significantly heavier, which doesn’t make them ideal for racing cars.

These have higher thermal efficiency, but it also has a slower heating rate compared to aluminum heads. And this is mainly because it can retain heat much longer.

Heads that are made of aluminum, on the other hand, are easy and fast to heat and lightweight, but they are also more expensive and have low thermal efficiency.

Another great thing about an aluminum cylinder head is that it is easier to repair because of its soft and flexible characteristics. And it can also prevent pre-ignition and detonation, which can cause damage to your engine.

You will be able to find certain valves, springs, guides, rocker arm supports, and other smaller components. Aside from housing these components, its main function is in serving as a conduit for both the fuel and the coolant of your car’s engine.

The number of cylinder heads that an engine usually has depends on the model of the engine. And these should be very robust since they are subjected to extreme heat and high pressures.

Functions of a Cylinder Heads 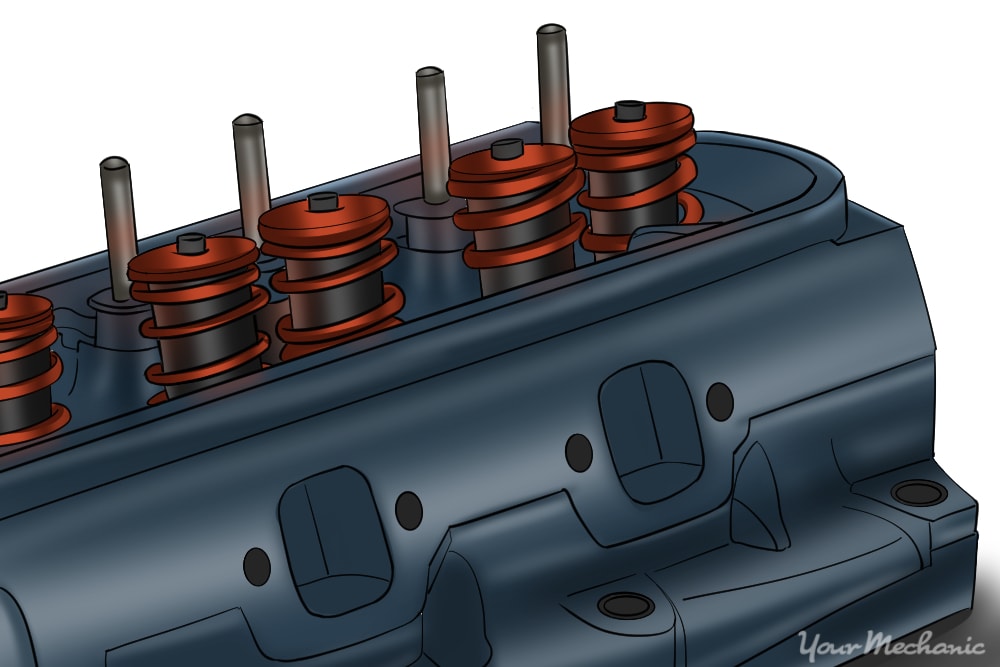 As previously mentioned, cylinder heads are an important component of the engine. It has several functions that can affect the performance of your car. This is why many car owners spend more time deciding what cylinder head will be better for their car.

In this part of the article, you’ll be able to know everything that makes a cylinder head so important.

Cylinder heads are usually made of several passageways or channels. The number of these passageways depends mostly on the design of the product. Many channels don’t usually mean a good cylinder head because this will still depend on the model of your engine.

The passageways that can be found inside a cylinder is where both air and fuel can flow. They are also used as a conduit for the flow of fluid mixture which is essential to the operation of the engine.

While it serves as a channel for the entering of fuel, air, and fluid mixtures, it is also a channel where exhaust fumes can go in so that they are expelled from the engine.

When exhaust fumes go through the channels of the cylinder head, they are then transferred to the exhaust valves.

If you own a car, you’ll know the importance of keeping the engine’s temperature in check. Engines will tend to heat up, especially when they are used for a long period of time.

Whenever an engine overheats, it can cause significant damage to it and can stop you from enjoying your drive.

The passageways are also designed in a certain way so that the coolant will be able to fully flow from the cylinder head throughout the head of the gasket.

This circulation is very vital so that the engine and all its other parts do not overheat even with long use.

Hopefully, you are enlightened about what cylinder heads are and what they actually do. This review is sure to be helpful in enhancing the overall performance of your vehicle.