Over the years, radio manufacturers are in a bid to mark their supremacy in their line market. Sprouting inventions came and are still coming to light. One particular innovation that seems to be taking center stage is the durability aspect of the radios.

Brands understand that consumers are more attracted to long-lasting and impact withstanding radios. The realization of this fact brought about the evolution of radio models, with each stage presenting a better version than the previous.

Waterproof radios are the current deal makers, and giant brands are embracing the idea of making such radios. Baofeng radio is not lagging in bringing the concept to reality

Baofeng radio embarked on a remarkable journey almost two decades ago to make a mark as one of the current leading radio entrepreneurs. They came to light back in 2005 with the Jingtong 208 and 308 and Puxing PX-777.

The two radio brands are the predecessors of the current Baofeng radios. From 2010, the Baofeng UV-100 and 200 o revolutionized the original radio. These models brought about upgrades in terms of outlook and reception quality.

It is from there that the current Baofengs came about with Baofeng 3R and 5R headlining the course.

While the Jingtong and the Puxing had 30 channels, the new models came with 128 channel capacity.  As per now, there are multiple radios to choose from the BF series, UV series, DM series, and GT series.

For the Baofeng waterproof radio, three brands stick out. That is the Baofeng UV-9r, the Baofeng BF-A58, and Baofeng GT-3WP. The three radios are both water and dust resistant.

In case you are into water games like boat competition and kayaking or you work in a dusty environment, you ought to add one of these to your shopping cart.

The GT-3WP is the same as the UV82. The only difference is, the casing of the GT-3WP is more advanced and improved.

The three waterproof radio possesses almost the same specs too. The only difference comes in the output power and the IP rating grades.

Therefore, the transmission range of the BF-A58 is a bit lower than the rest. The other distinctive feature is that the BF-A58 is IP-57 rated while the rest are IP-67 rated.

What is the IP rating, and how is it interpreted? 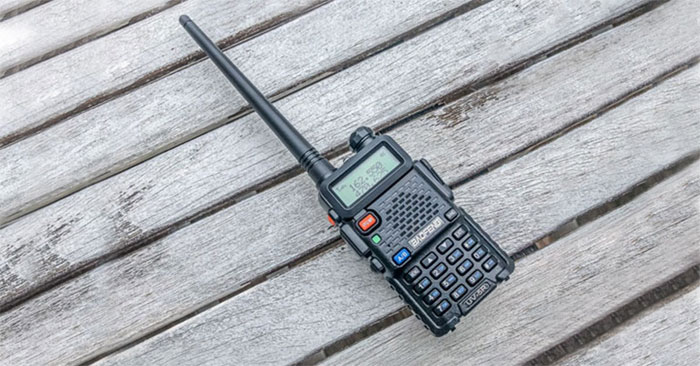 For you to understand if a radio is water or dustproof and to what extent, you have to grasp the IP rating system.

IP is an abbreviation of the term Ingress Protection, or sometimes it can be referred to as International Protection. The IP rating is in line with the EN 60529 international standards.

The standard grade sheds some light on the sealing extent of an electrical device. Sealing done on electrical applicants is vital to curb the entry of foreign particles such as moisture and dust. The same principle works for the IP rated Baofeng radio.

For better understanding, below is a sampled IP enclosure ratings listing. It doesn’t capture the whole table but will guide you when you come across an IP grading within limits.

The first digit interpretation is as follows:

0- The radio or device is not protected at all

1- The device has protection against solid objects measuring over 50mm

2- The device has protection against solid objects above 12mm

3- The device has protection against solid objects above 2.5mm

4- The device has protection against solid objects above 1mm

5- The device has partial cautioning against dust particles

6- The device has complete cautioning against dust particles

The second digit interpretation is as follows:

0- No protection at all

1- Cautioned against droplets of water from a vertical position

4- Partial cautioning against water splash from any direction

6- Partial cautioning against strong water splash from any direction

7- Cautioned from 15cm to 1-meter depth immersions in water

For example, if a device is rated IP65, that means it has total protection from dust particles and low-pressure water splashes from any direction. However, there is a more advanced IP rated table detailing all the ratings available.

For the likes of IP-67 ranked Baofeng radio means it is sealed against dust intrusion and protected from 15cm to 1-meter depth immersions. The interpretation of BF-A58 implies that it has partial protection from dust particles and 15cm to 1-meter water submersion.

The waterproof Baofeng radio brands are the way to go in radio communication. They can withstand the harsh elements that nature, and perhaps your job field throws your way.

With moisture and dust protection mechanism, your communication line stays uninterrupted despite the environment or the conditions around you.

The Baofeng UV-9R is a special one because it can cope with heavy pressure too! That’s right; the radio can endure the pressure of being run over by a personal car.

The sealed casing of the radio backs up its durability aspect too. If you accidentally drop the radio in water, all you have to do is fish it out and continue with your conversation. The advanced casing of the GT-3WP can hold up against drops and crashes on hard surfaces.

With these waterproof radios, there’s a great guarantee that you’ll enjoy the company of your new best friend for a very long time. You might even pass it down to your off springs, you never know.

It is beyond doubt that Baofeng keeps its name and reputation flying high. The waterproof radio is proof enough that the brand is willing to go the extra mile to offer you with quality up to date walkie-talkies. For that reason, it’s thumbs up to them for a job well done.